Sevilla to the Roman city of Italica 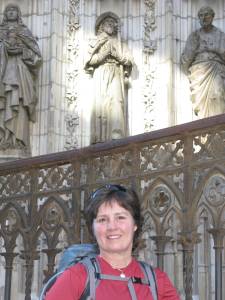 We walked through the lovely pedestrian streets of the Santa Cruz district for the last time as we left beautiful Sevilla, pausing at the Cathedral to ask for safe passage. A ray of sunlight illuminated the statue of Santiago Peregrino, or St. James the Pilgrim, on the facade. Just then a man asked us if we were Pilgrims. He then spoke to us very sincerely in quiet, gentle Spanish for close to 5 minutes. He said a lot that I did not understand, but that was not important. It was the touching of hearts that counted.  I did understand that he felt deeply in his heart, bringing tears to his eyes, that our commitment to walk such a long way to Santiago was very important. He seemed to be saying he was a Pilgrim himself, and gave us a blessing for a good journey.

Modern day Santiponce is the site of the ruins of the Roman town of Italica.  They were not very well-preserved and they were, well, ruins! After Pompeii and Herculaneum they seemed like little wall footprints. However, there  was a coliseum, a well-preserved theater, extensive baths, and some beautiful mosaics still in place.  It is lovely to  imagine the past glory of what once stood in this very spot.  The sculptures, extensive mosaics and other artifacts that we saw yesterday in the archaeological museum paint a more clear picture of the former opulence.  The site itself sits in a beautiful open field with rolling hills where you can  see the layers of history. Sevilla shimmered  in the distance and the modern town of Santiponce began right at the edge of the ruins. Today there was a delightful wedding fiesta in progress amid the pagan temples and the coliseum where gladiators once fought!

Italica was founded in 206 BC and thrived for about 400 years before it went into decline. As the first Roman settlement in the south of the Iberian peninsula, it quickly became an important city. It was founded as a home for soldiers injured in the Roman-Carthagenian Wars,  and the Emperor Hadrian lived here. The Emperor Trajan was born in Italica,  and he was the very first Roman Emperor to come from the colonies. He was one of the greatest rulers of the Roman empire. 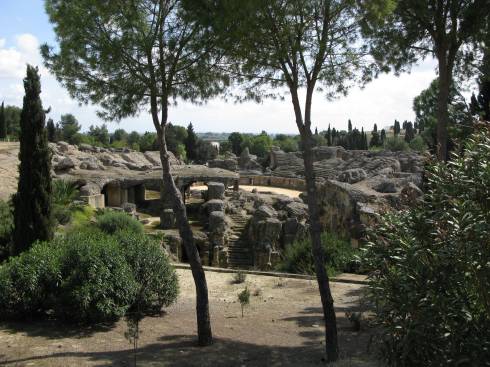 Distance from Seville to Santiponce/Italica = 6 miles.

Accommodations= Hotel Anfiteatro Romano across from the Roman ruins, a very nice hotel priced at 45 Euro for a double room.

On The Road Again

One of the great things about walking the Camino de Santiago is the opportunity to learn.  Despite my best efforts to keep my blog current, things did not go as planned. Does this sound like a metaphor for life? Hopefully, if you are planning to travel abroad this information will help you. I found it was impossible to send photos home because no one will allow you to download anything on their computer. This means you can’t post photos to flickr, a blog, or anywhere else. Internet cafe’s are becoming a thing of the past just like phone booths, as everyone seems to carry their own smart devices. If you have a smart phone or I-Pad from the USA it does not necessarily work in Europe, despite the assurances of the manufacturers. However, if you are planning to do emails from Spain, I did find out that most medium sized and larger towns have a library, or Biblioteca, where you can use the computers and access the internet free. I was disappointed that I could not do my blog as I went along, yet it was an incredible and amazing journey, so this seems like a small thing n the big scheme of life. 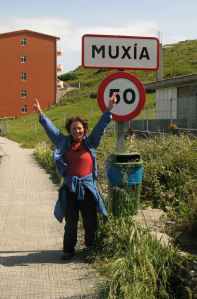 I will tell you that I made it to Santiago across a beautiful and varied countryside, covering over 800 miles on foot. I will begin my blog posts again next week, complete with photos and daily mileage/ accommodation information, as a travel log. I have updated the posts from Sevilla with photos, so you can revisit that incredible city a bit more visually.  I hope you will follow along on my adventure even though it is not in “real time”. Please join me as I relive this wonderful journey.

Photos: Marcia at the o.oo Kilometer marker, signifying the end of the Camino  at Finisterre, the End of the Earth.

Marcia celebrating being a victorious Pirigrina at the town of Muxia on the northwest coast of Spain.

Sunset over the Atlantic where the next landfall is the Americas. 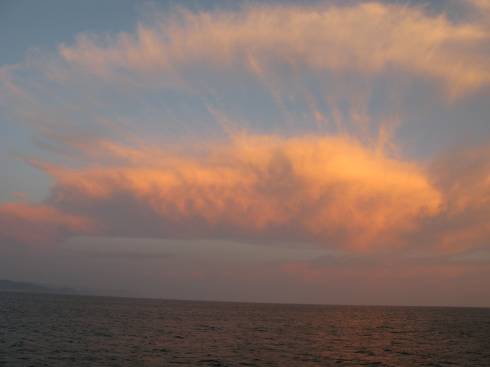